From fans for fans

Worthing have been represented in the Worcestershire & Kidderminster District league since 1885. At some point the name changed and was re-formed under the name Worthing Comrades possibly due to the First World War. The comrades were formed by a group of men who had been comrades during the 1914-1918 war, their headquarters was the 'Old Pack Horse' in Welsh Gate.

In 1927 Worthing dropped the Comrades name and were simply called Worthing F.C and were playing in and were founder members of the Worcestershire Combination (later known as Midland combination in 1968). Worthing F.C remained in the league until 1938 were they finished bottom and left the league.

In 1948-49 Worthing F.C joined the Kidderminster League Division 1 and finished runners up to Highley. (Teams in that division at the time Bridgnorth and Ludlow, with Stourport Swifts joining in 1950). Worthing F.C finished 2nd again in 1949-50 this time to Steatite.

In 1952 Worthing F.C revived the name Comrades and was now known as Worthing Comrades F.C and in 1957-58 were Kidderminster league champions. After many successful years the life of the 'Comrades' game came to an end around 1974, and the main representation of the town became Worthing Town Old Boys. Read more about our history. 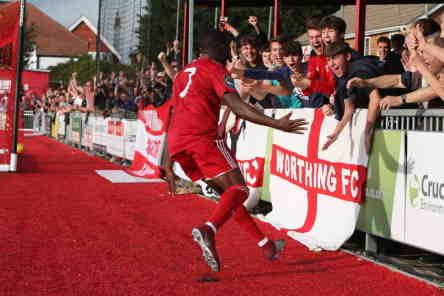 Worthing were on good form today and even with a reduced team, they managed to play a good game and were easily the better side on the pitch. As the play settled down, Worthing began to build their attack and their first goal came from a free kick which was whalloped up field by Charlie J to Dan B who controlled the ball and passed it onto Tom P who casually knocked it high over the keeper’s head into the back of the net. Kinver had one chance to even the score but Worthing’s goalie, Keelan M, made a grab for the ball but dropped it over the line, for a Kinver corner. Quickly the possession was restored to Worthing as Kinver couldn’t make anything from the corner. Kinver did have one more chance before half time as the ball was crossed in the box but it skimmed past the post for a goal kick.

Kinver seemed to have lost the fight and their play showed their subdued mood. Worthing worked hard and kept pressurising the visitor’s defence, Harry J worked through the defence and passed to Dan B whose shot was sent wide. Matt D and Charlie J did a great job in defence and held off Kinver’s attempt to break forward. Frasier S had a strong presence in midfield and helped to keep any chances from Kinver to a minimum. Tom P had a shot just wide of goal and Harry J also had another near miss as Worthing’s confidence began to build. Worthing’s second goal came courtesy of a Kinver goal kick which Tom P knocked back in the box, Kinver panicked and the ball was headed in by a Kinver player. The final goal came from Harry J as the ball was sent down field from the Kinver half, Harry burst through the defence and easily scored goal no. 3.

It does me some good to report on yet another superb display by the lads - We travelled (Some distance!) to Bournville (Is that in Stourbridge & District; area?), to play against a team which had previously beaten us at home 7-1. We had only the 11 players, so any injuries would have impacted but thankfully despite a few knocks the lads were able to play through the pain barriers and play the full match.

We started with real purpose against a team which are a good footballing side - All of the lads closed the opposition down from the start and didn't allow them to settle or create too many chances at all and for about the first 35 minutes we had them hemmed into their half.

It wasn't until a bit more pressure was applied that Cadburys were able to break our resolve and score the first goal. We had our fair share of chances in the first half but nothing which challenged their keeper too much apart from 1 blistering shot from Sam Woodhouse, which beat him from 6 yards out and was somehow kept out by a defender off the line.

The half time talk was as always - "We can beat this team if we really want it - Get to the ball first and make things happen". Well - The lads did make things happen and as is always the case when they keep the communication and endeavour going, they are a different team entirely - Sam Woodhouse latched onto a midfield pass and took on the defender to strike a low pacey cross which was met by Scott Ife who scored his first goal for the team.

This lifted the lads and it wasn't too long before we exerted more pressure and Sam Woodhouse was able to take on the defenders again and score to put us in the lead (Brilliant feeling!!) Goalkeeper Ryan Bromley made some superb saves when Cadburys managed to get through on goal and Sam Palmer Young was a welcome return addition to our midfield and he had a big influence on the midfield keeping Cadburys at bay, along with the other midfield team Will Woodhouse, Zak Thomson And Todd Horton.

Our back four Matt Garbett, Ben Thompson, Ben Green and Tom Draper were brilliant throughout and only a temporary slip up allowed Cadburys in to equalise. Once again the lads showed their tenacity and dug deep to create a number of chances (One hitting the cross bar from Sam Palmer Young).

Todd Horton was playing with some purpose and was turning the opposition inside and out with his runs towards goal and it was his long punt up field which Sam Woodhouse took down brilliantly just in the oppositions half and sped past the 2 defenders covering him - 1 on 1 with the keeper he dispatched the shot with some pace and the keeper had no chance 3-2 - This seemed to take the wind out of the sails of the Cadburys team and Worthing Town definitely finished the much stronger and fully deserved the win. Find more club information on the specific page.

ANOTHER HOME GAME ANOTHER VICTORY AND ROONE IS STILL LOOKING FOR THAT ELUSIVE GOAL! BEWDLEY TOWN FC U 11 ARE 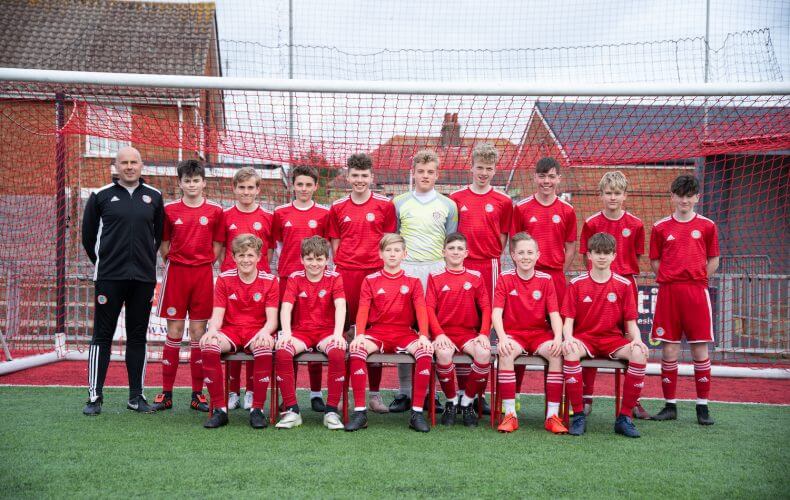 With Aidan Wilkinson up front and brad davies in central midfield worthing started deliberately slowly. Passing and movement from both teams were positive in the initial stages of the game, punctuated with an exciting run and shot from brad. Ryan wWnters was called into action as he saved confidently and then Brad wriggled through onto goal only for the keeper to save with his feet. A further save from ryan spurred the lads on and as the ball bounced invitingly for brad he lashed at the ball and then watched it curl over the outstretched hands of the tigers keeper into the net. Worthing continued to press and Adam Roper and Sammy Lester both had good opportunities saved by the away goalie.

The second half saw the tigers press early on for an equalizer. Danny Williams replaced Aidan Wilkinson and adopted his favoured position in midfield as brad moved up front. The two soon combined when danny crossed for brad who miss hit his shot and the keeper fumbled the ball into the net. Worthing looked never in any danger for the remainder of the game. Henry Kowalik replaced Wayne Tipper and brad reverted to midfield, before being replaced in turn by Aidan. This was a steady strong and sensible performance with an excellent contribution from Brad Davies. Unfortunately roone is still looking for that elusive goal.